Why People Should Consider Studying in London, United Kingdom

London – the capital city where opportunities for academics and professionals reside is a metropolitan that many people dream of making their home. Rich with history, this city has come a long way from the time it was lovingly known as “The Big Smoke” or “The Old Smoke”.

Today, the city is home to some of the most venerated and extolled educational institutes that range from grammar and preparatory schools to colleges and universities. From learned professionals, academics and scholars to research, these pedagogical institutes have been held in high esteem for making notable contributions to sciences, arts, literature, theatre, and other fields.

Considering the academic opportunities universities London offers, both domestic and international students have made it their choice for facilitating the pursuit of higher education. In fact, it was, once again, ranked number 1 by QS World’s Best Student Cities in 2019.

If you’re planning to make your way out of your hometown or country in pursuit of higher education at graduate, post-graduate or doctoral levels, you should consider studying in London.

Facts About Higher Education in London

Why Consider Studying in London

London is deemed as one of the leading educational hubs centres in the UK and the world. 17 of the 45 universities or higher education institutes in London are ranked among the top 100 in QS World University Rankings in 2018.

These universities offer both academic and research opportunities for undergraduate and post-graduate students. From arts and humanities to medical and polytechnic institutes, these are world-class universities that continue being recognized by well-known bodies.

Alongside these, there are other universities that are not part of the University of London that offer courses in business, economics, management, medicine, sciences, languages, and more.

What London lacks in terms of a truly “historic” or ancient university in city limits, it makes up in the quality of education and thriving location.

London boasts a growing corporate culture that offers graduates an opportunity to find occupation in their respective fields, from theatre, opera and musical opportunities on the West End to technology, digital media, legal and financial firms.

You remain right in the heart of one of the most thriving cities in the world, having the chance to find employment in 75% of the Fortune 500 companies that have offices in London. Furthermore, graduates get to enjoy higher starting salaries when compared to other cities in England.

For international students that can’t make it back home for summer break, they can apply for internships and training positions in the city. There are also several incubators in London where student entrepreneurs can explore their chances of success. 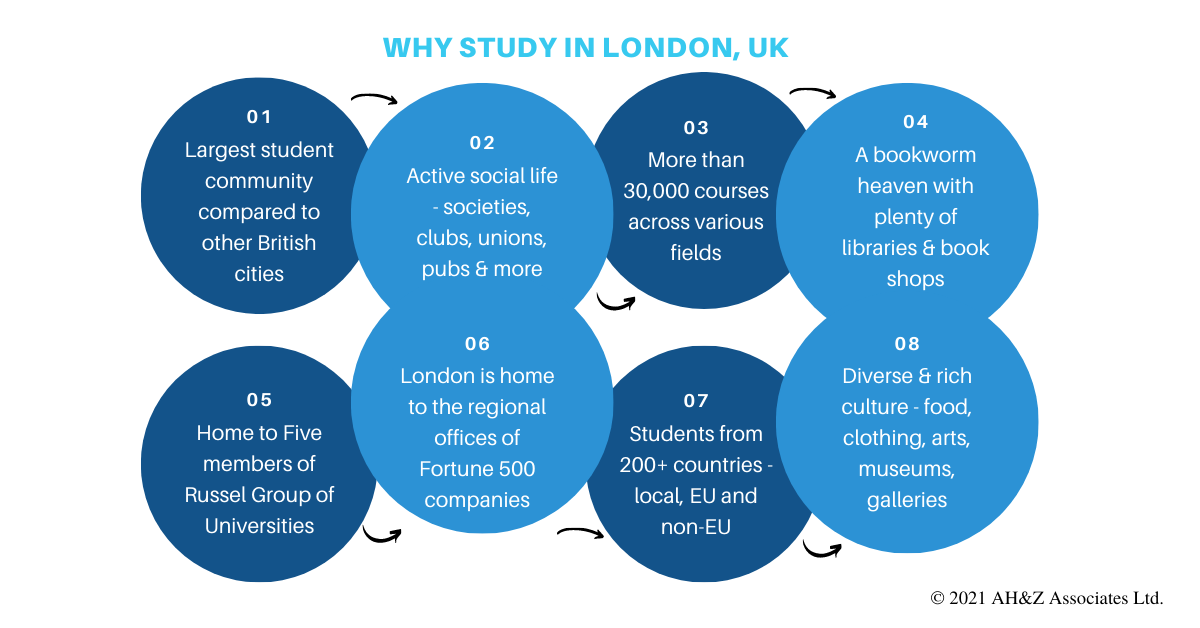 One of the most attractive facts about London is its multicultural population. From food to diversity of nationalities and ethnicities you come across in the city, you can find a wide range of cultures thriving in different areas within London.

Southall, a suburban district in west London, is home to a growing Indian and Pakistani population. In fact, over the years, the district has been dubbed as “little Punjab” due to its large Sikh and Indian-Punjabi population.

A melting pot of different cultures, cuisines, and languages, international students can find a little piece of their home away from home with ease.

If you’re a reader and love being around books, there are plenty of libraries in the city to find your favourite spot. In addition to the British Library, the National Art Library and Senate House have incredible collections of books, recordings, and other publications.

These libraries come as additional perks as higher education institutes or universities have their own library setups as well. In addition to libraries, there are plenty of museums around London to indulge your academic curiosity. The Natural History Museum along with the National Gallery and British Museum are popular.

Since student life goes beyond universities and classroom education, London comes out as a great location to study in. If you’re using university education, you’ll be located in halls around the city and not the central campus – this is quite normal for first-year students.

This works out in the students’ favour as they can experience a lively social life. You can meet students from other universities around London’s pub scene. Additionally, there are societies, club, and both campus and non-campus events students can participate in to meet new people and find extra-curricular activities.

Furthermore, there are famous sights and attractions peppered within the city and in locations just outside it. While we’ve covered museums, there are shows, clubs, modern and historic architecture, and other landmarks you can go sight-seeing.

There are also plenty of grassy knolls, parks, and open spaces that you can stroll in. In fact, over 50% of the city is green with plenty of places for a Sunday picnic, lacrosse or rugby match, or rowboat at Regent’s Lake.

While London is considerably large and sprawling, you can still enjoy a lively social life without worrying too much about transportation. It’s well connected through the tube, a network of buses, taxis and ride-sharing applications services like Uber. Students can also avail special discounts and offers for public transport during certain times of the day.

Conclusively, London is a city that is not only great for those seeking academic and/or research pursuits, but it is a place that offers something for everyone. Home to internationally-acclaimed universities, respected organizations, cultural diversity and booming social life, it’s worth considering to study in London.

We can help you get admission to the university of your choice in London, the United Kingdom. Contact us today.